As humans continued to settle, they began forming more organized civilizations including religions, systems of writing, grander architectural traditions, and class systems. This module will discuss the rise of civilization from the Mesopotamian cultures through the three thousand years of Egypt.

Ancient Mesopotamia, also known as the "fertile crescent," was an area of the now Middle East where the rivers Tigris and Euphrates fed the birth of several civilizations over the span of four thousand years between 3500 BCE and 636 CE. Cultures such as the Summerian, Akkadian, Neo-Sumerian, Babylonian, Hittite, Assyrian, Neo Babylonian, Achaeminid, Greco-Roman, and Sassanian cultures all held power at various points within this history. Great cities such as ancient Babylon, Ur, Uruk, and others demonstrate the power of such cultures to organize and develop their surroundings.

The civilizations invented the wheel, writing, and law. They had a variety of religions with the main purpose of praying and sacrificing for a more regular flood and harvest, though that was not often the case with these rivers. Their cuneiform system of writing allowed them to document their history and record offerings while laws, such as the "Code of Hammurabi" have become precedents to modern law including the concept of presumed innocence.

To help form a better understanding of the context of these cultures, I have compiled a few resources that you may browse through. I do not expect you to read or watch all of them, (because there are a lot of resources), but please pay attention to the contextual history of the area and form a general understanding before moving forward. 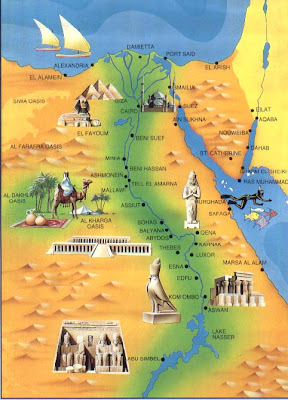 Ancient Egypt is an empire that lasted over three thousand years from nearly 3500 BCE to 30 CE or 3000 BCE to 332 BCE depending on what markers you use. The very length of this civilization's survival continues to captivate audiences as we put our own civilization's time in comparison, the United States being only a 237 years old as of 2013. The time of Egypt has been broken up by Egyptologists to three main periods all sectioned by dynasties: Old Kingdom from 2649 to 2152 BCE; Middle Kingdom from 2040 to 1640 BCE; New Kingdom from 1550 to 1070 BCE. Between these and after these there are a few "intermediate periods" as the civilization was either in turmoil or transition including the Armana Period under Pharaoh Akhenaton.

The Egyptian civilization resides on the Nile river and is divided into Lower Egypt (North) and Upper Egypt (South) according to the flow of this river. The river was tame and allowed for fertile banks that were easy to cultivate allowing the civilization as a whole to become extremely wealthy. The civilization did contain itself to the river as, not far from its banks can be found the Sahara Desert.

The civilization's structure included a religion with a polytheistic mythology focusing on the concept of an afterlife and the soul or "Ka." The civilization was ruled by a king called Pharaoh, who was essentially a god on Earth. All of life was dedicated to preparing for death and the afterlife.

To help form a better understanding of the context of Egyptian culture, I have compiled a few resources that you may browse through. I do not expect you to read or watch all of them, (because there are a lot of resources), but please pay attention to the contextual history of the area and form a general understanding before moving forward. Feel free to return to these resources when doing projects or forming arguments:

The rise of these early civilizations saw innovations in architecture as the settlements allowed the cultures to build grander structures to whether the elements and to honor their gods or kings. Several innovative structures as well as techniques were developed. The Mesopotamian cultures were known for their ziggurats, walled structures and citadels, and grand columned and vaulted halls. The Egyptians developed wonders of the ancient world including pyramids, necropolises, rock-cut tombs, massive temple structures, hypo-style halls, and large obelisks. In this section, we will focus on these architectural innovations.

The rise of these cultures required a system for documenting trade, religion, and history. The Summerians invented a system of wedge-like marks pressed into wet clay as a surface called cuneiform. Egyptians also had a system of writing called hieroglyphics. Both systems are based on a pictographic language where the symbol demonstrates the noun or verb that it depicts. Proper names or other phonic necessities were often created by combining images to be sounded out. For many years the Egyptian Hieroglyphs were untranslated until the discovery of the Rosetta stone, a legal document that was written in formal as well as vernacular hieroglyphs as well as Greek.

The ancient civilizations produced many sculptures that have lasted the years. Evidence of many different types of materials have also been found accounting for the concept of value within each culture. Sculptures were constructed out of marble, limestone, copper, diorite, basalt, and bronze. The sculptures document historic events, people, gods, and real as well as mythical beasts demonstrating the power of the empires.

In each of these cultures there were depictions of people of various social classes. Often you will find that the scale of the most important individuals was much larger than those of lesser importance in the social hierarchy. In Egyptian culture, the ruling class was depicted by a standard canon of proportion that restricted artists to a composite view that was descriptive of all elements of the human form. Though the artists could depict forms naturally with great observational skill, they restricted such observations to lesser animals and social classes. These qualities can be found in some of the relief sculptures described above as well as the following: